What is High Tea?

The drinking of tea not only became a social event for the upper classes, it altered the time and manner in which they took tea. Afternoon Tea became the bridge between meals because many wouldn't eat their evening meal until maybe 8pm. As such, Afternoon Tea became a 'mini meal' in itself.

This was all well and good for the upper classes, but the working classes ran to a different schedule and a different budget. Tea was still quite expensive at the time and the working classes could not afford to waste it on anything other than necessities. A wearied factory worker wouldn't arrive home until six in the evening, and when he did, he was famished! Thus, in the industrial areas of the UK (northern England and southern Scotland), the working classes evening meal evolved: high tea. 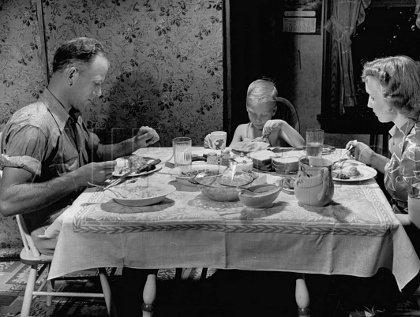 Buy a print of this photograph from Allposters.co.uk

English High Tea usually involved a mug of tea, bread, vegetables, cheese and occasionally meat. Variations on high tea could include the addition of pies, potatoes and crackers.

So while Afternoon Tea was largely a social event for their upper class counterparts, high tea was a necessary meal in the eighteenth and nineteenth centuries. This traditional high tea still exists for some parts of the North and Scotland.

Why is it called 'high tea'?

A possible explanation why this type of meal was called high tea is the fact that it was eaten at a table. In comparison, Afternoon Tea was taken whilst seating in low, comfortable chairs or sofas. Of course, soon after, the upper classes developed their own variation and also called it 'high tea'. It was a meal that could be eaten when their servants were away or not available, as it was so easy to prepare. The upper class 'high tea' involved the amalgamation of Afternoon Tea and high tea, with the addition of pigeon, veal, salmon and fruit.

It is important to add that the Afternoon Tea menu served in the UK today is often refered to as high tea in many other parts of the world. Because of this some hotels, such as The Ritz in London, use the term 'High tea in London' to advertise their Afternoon Tea because a large proportion of their customers are from overseas.

Some venues do serve a special high tea menu, in addition to Afternoon Tea, which includes additional savoury items such as Welsh Rarebit, English muffins, pies or omelette.

What is Afternoon Tea?

Buy tea & teawares from our partners Fortnum & Mason,
Twinings and Whittard of Chelsea