London’s West End is the centre of the Afternoon Tea world and is packed full of historic buildings, incredible shops, open spaces and visitor attractions.

In celebration of Afternoon Tea Week, we explore some of the best venues to go for Afternoon Tea along with suggestions for things to see and do in the same area, which combine to make a great day out in and around Piccadilly and St James's.

Today we take a stroll through Green Park, stopping off afterwards to indulge in an experience that's one to tick off the bucket list: Afternoon Tea at The Ritz London.

The smallest of the capital's eight famous Royal Parks, positioned between The Mall and Piccadilly, was opened to the public by King George IV in 1826 - and visitors have been able to enjoy its serene surroundings ever since! 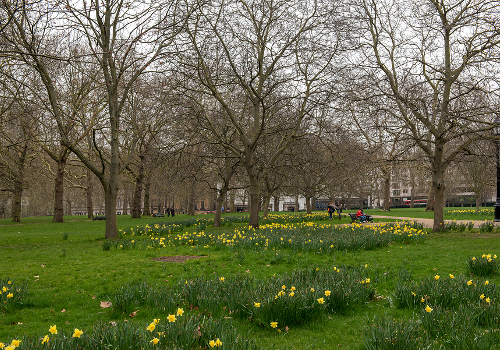 However, the space wasn't always renowned for its regal tranquillity. The first historical document of the park is from 1554 when it was the site of a rebellion led by Sir Thomas Wyatt to protest the marriage of Mary I to Philip II of Spain - and it then gained a notorious reputation as a hangout for pickpockets and highwaymen.

This was until King Charles II acquired the land in 1668, which he initially named Upper St James's Park, so that he could walk from Hyde Park to St James's Park without leaving Royal soil.

Although it had humble beginnings, Charles II quickly became fond of his new Park and would go on his daily walk with his spaniels through the grounds. This became known as his "Constitution", which inspired the name of Green Park's Constitution Hill.

The actual name didn't change to Green Park until 1746. The reasons for this are unknown but it is probably inspired by the green aesthetic as this is the only Royal Park without a water feature or flowerbeds. The reason for the lack of flowerbeds has become the subject of urban myth with the story being that Catherine of Braganza ordered all the flowers to be removed after she discovered her husband, King Charles II, was caught picking flowers for his mistress on the grounds. 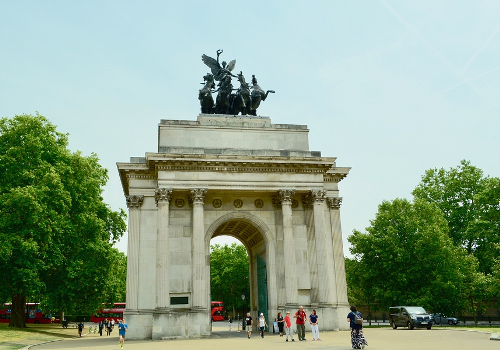 Our walk begins at the foot of the famous Wellington Arch, the spectacular Grade I listed landmark that was designed to commemorate Wellington's triumph over Napoleon.

From here, we retrace King Charles II's famous old route through Constitution Hill, entering through the Memorial Gates, a magnificent pillared structure inaugurated by Queen Elizabeth II in 2002 to honour the lives of soldiers who served in World War II from India, Africa and the Caribbean.

Continue through the tranquil grounds until you reach the Victoria Memorial, an ornate marble monument unveiled in 1911 to celebrate the life of Queen Victoria. This spectacular structure is a suitably grand way to celebrate Britain's longest serving monarch, with features at the base of the statue all celebrating Britain's advances during Queen Victoria's reign. 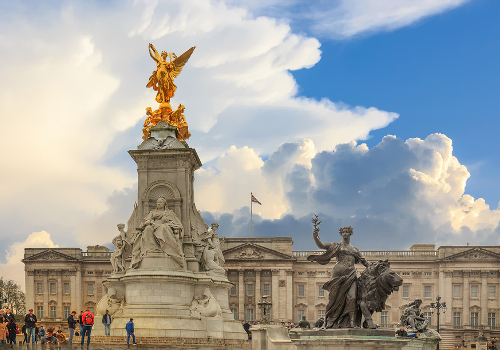 No trip to London is complete without viewing perhaps our most iconic piece of architecture, Buckingham Palace. Its regal beauty is unmissable behind the Victoria memorial.

There is still a lot more of the park to see and you can re-enter through the magnificent Canada gates, a gift from the North American country in 1901 to celebrate their contribution to the British commonwealth. 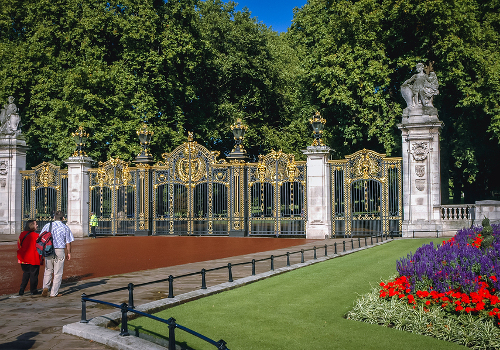 Just a short walk from the Canada gates is the Canada memorial, which remembers one million Canadians who served with British forces during the two World Wars. The walkway points in the direction of Halifax in Nova Scotia as this is where many Canadian soldiers sailed from to serve in Europe. 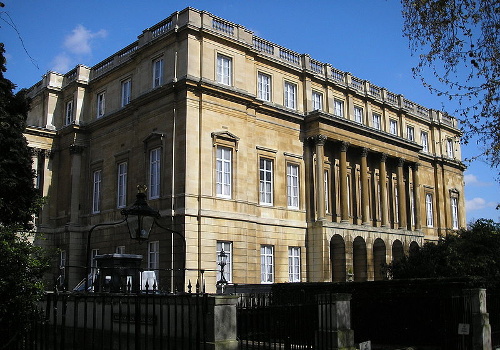 One of the key figures in Green Park's development was George II's wife, Queen Carole, who commissioned the development of the Queen's Walk in 1730 on the east side of the park. First on this grand route you will encounter Lancaster House, which was once the most valuable property in London.

If you continue down Queen's Walk, you'll come across Bridgewater House, a renaissance palace like structure that once held the greatest private collection of art in the world. Designed by the same interior designer who built the Houses of Parliament, this is unfortunately not open to the public, so you are unable to look inside while on a sightseeing tour through Green Park. 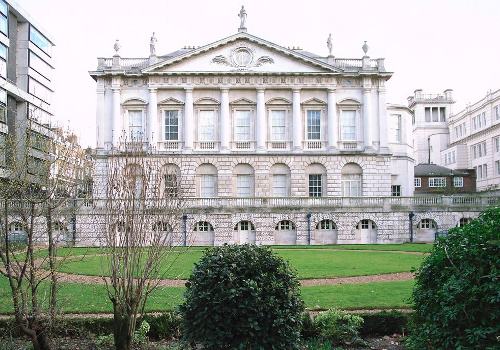 Our final sight on the stroll down Queen's Walk is the beautiful Spencer House. Originally built for John Spencer, who was an early ancestor of Diana, Princess of Wales, Spencer House is a beautiful example of classical design that is London's only surviving 18th century private palace.

A busy day exploring the wonders of Green Park is sure to work up an appetite, so it's fortunate that we now find ourselves on Ritz Corner, home to one of the most luxurious 5-star hotels in the world. 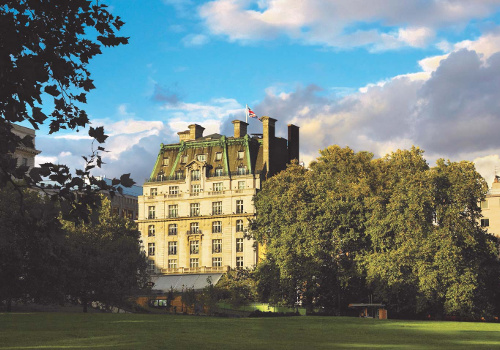 Indulging in Afternoon Tea at The Ritz London is one of the things you must do on any trip to London.

Ever since it opened its doors in 1906, The Ritz has become synonymous with prestige and luxury, which makes it a suitably grand place to indulge in the great British tradition of afternoon tea.

Served in the spectacular Palm Court against the backdrop of glittering chandeliers and elegant mirrors, the afternoon tea experience has developed such a famous reputation for a reason. 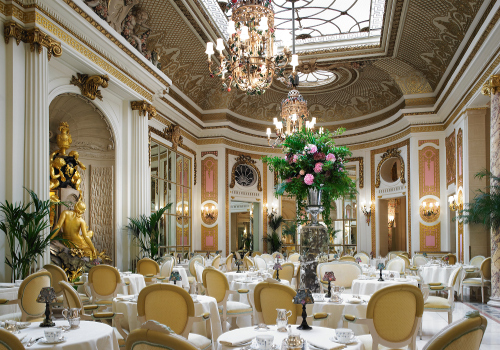 Their menu is a perfectly executed version of the quintessential Afternoon Tea, where guests can enjoy finely cut sandwiches before tucking into freshly baked scones and a delectable selection of sweet treats. If you are feeling in an extra decadent mood, you can embrace the indulgence of the occasion by adding a glass of  Champagne.

Guests can accompany their range of treats with a choice from 18 different types of loose-leaf tea, all selected by The Ritz's certified Tea Sommelier, Giandomenico Scanu, who travels around the world to various tea plantations to ensure the teas served are of the finest quality! 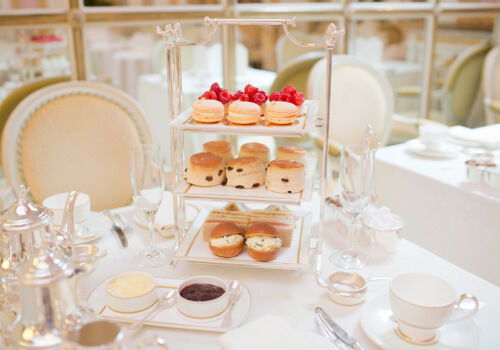 You can book your Afternoon Tea experience at The Ritz here.

Fun Fact…Although Green Park is known for not having a lake or water feature, the River Tyburn actually runs underneath the surface flowing towards the River Thames!

Look out for…The black poplar trees. Try and see if you can spot one of Britain's rarest trees.

Want to know more about what to do in the area?
Visit stjameslondon.co.uk and follow @stjameslondon and @london.westend

More about The Ritz