London’s West End is the centre of the Afternoon Tea world and is packed full of historic buildings, incredible shops, open spaces and visitor attractions.

In celebration of Afternoon Tea Week, we explore some of the best venues to go for Afternoon Tea along with suggestions for things to see and do in the same area, which combine to make a great day out in and around the Piccadilly and St James's area.

In today's trip, we take a stroll around the famous Burlington Arcade before escaping the hustle and bustle of the original shopping mall in the elegant surroundings of The Wolseley.

The grand shopping arcade was originally built in 1819 by designer Samuel Ware for Lord George Cavendish, who had inherited the neighbouring Burlington House. This year marks the 200th anniversary of this historic landmark.

There are conflicting stories as to what prompted the Earl of Burlington to commission the building to be constructed. Officially it was designed 'for the sale of jewellery and fancy articles of fashionable demand, for the gratification of the public'. However, some speculate that it was also made as a barrier to prevent members of the public throwing oysters (amazingly, the fast food choice of the period!) over the wall of Burlington House - so it's very possible Burlington Arcade could potentially have been intended as the world's most elaborate fence.

The Arcade was also intended as a safe space for the ladies of genteel society, in particular Lady Cavendish, so they could shop for luxury goods away from the high crime rates of London at the time. To guard the building, Lord Cavendish formed The Beadles, who were recruited from his own regiment, the 10th Royal Hussars, and are the oldest and smallest police force in the world! The Beadles still police the Burlington Arcade to this day. Dressed in a uniform of frock coats, silver buttons and silver-braided top hats, make sure to request a free of charge tour from The Beadles to get an insight into how things might have looked in Victorian Britain. 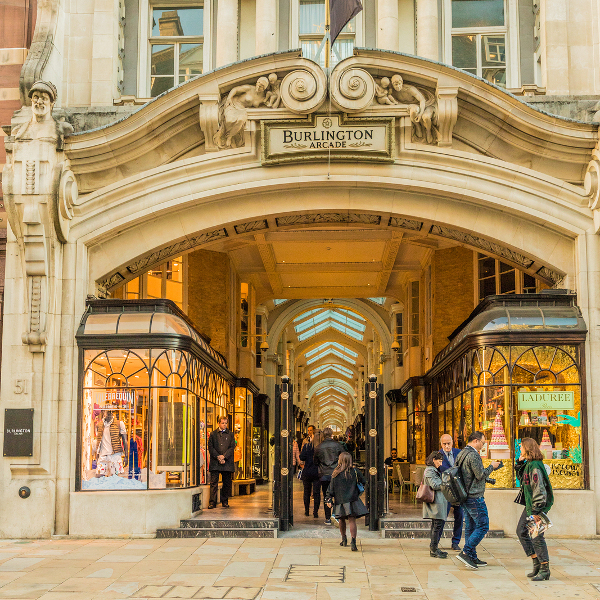 The entrances to the Burlington Arcade feature grand gates that suitably prepare you for the architectural elegance of this classic structure that oozes class. Although the gates initially seem like an authentic feature from when it was first built, they were actually installed as a preventative measure in 1964. This was after 6 men committed a robbery from the Goldsmith & Silversmiths Associate and escaped in a car they had driven through the centre of the arcade. The tranquil atmosphere of the shopping arcade would never betray it had such a storied history!

The interior is characterised by regal pillars that partition two rows of the finest jewellers, to name a few; David Duggan, Richard Ogden, Somlo Antiques and the world-famous Vintage Watch company. 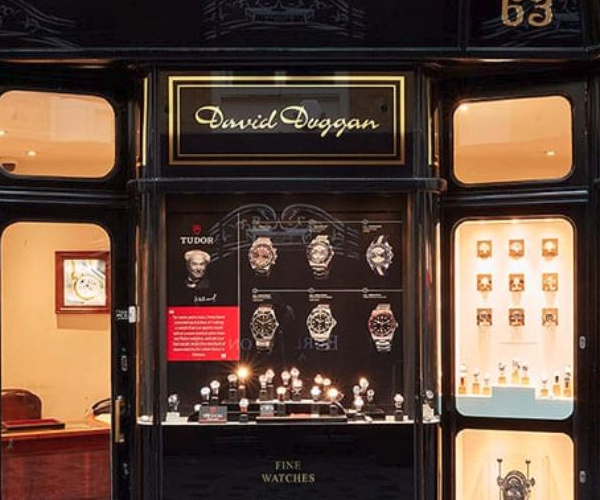 Also including some of the most exclusive designers in the world such as a Manolo Blahnik lady and gents shoe boutique. A beautiful glass roof bathes the Arcade in a wonderful natural light, where visitors can browse goods from luxury brands such as Chanel and Lalique. All this exclusivity is packed into 196 yards, so it's not difficult to see how it has developed an unrivalled reputation as a luxury shopping destination!

The Burlington Arcade also survived two huge fires in the 19th century and was subject to extensive rebuilding work after World War II, so it's fortunate we can still experience the regal magnificence of this shopping arcade today. The quality of the rebuilding work means it retains an authentic British charm and is a must-see venue for those looking to experience a true taste of London. 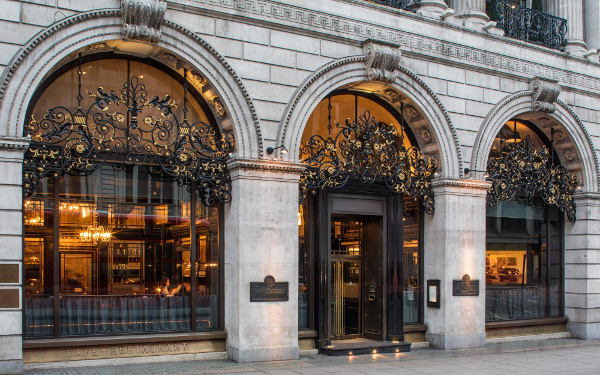 A busy day indulging in some retail therapy at Burlington Arcade is sure to work up an appetite, so it's fortunate that just over the road from the Arcade's Piccadilly exit is one of the most famous dining destinations in the world: The Wolseley.

Combining British heritage with European grandeur, you'd be hard pressed to find a glitzier setting to enjoy an Afternoon Tea than you can behind the doors of the Grade II listed building at 160 Piccadilly. Initially opened as a car showroom in 1921, this prestigious showroom was refurbished by Corbin & King in 2003 to become London's first ever grand café. 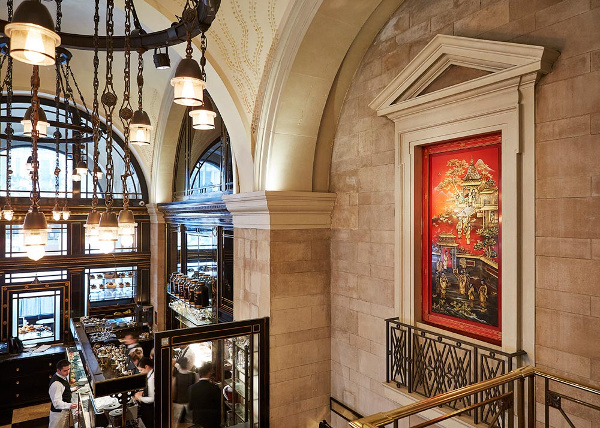 Adorned in grand pillars and an elegant monochrome marble floor, the spectacular interior provides a suitably impressive background to indulge in the great British tradition.

Despite the luxury of the venue, the Afternoon Tea is reasonably priced from £29.75 per person, giving guests the opportunity to sample a classic execution of the British ritual. The Wolseley Afternoon Tea consists of perfectly crafted finger sandwiches, which you can tuck into before the quintessential hallmarks of fruit scones and a range of handmade sweet treats.

For those inspired by the glamourous surroundings, you can embrace the decadent spirit of the jazz age by upgrading to add a glass of Pommery Brut Royal NV, priced from £40 per person.

The food offering at The Wolseley is celebrated for a reason. Having been awarded numerous Restaurant of the Year awards and serving a breakfast menu so good acclaimed writer A.A Gill devoted a whole book to it, you must try it yourself to see just what all the hype is about!

Fun Fact... The Beadles still enforce a regency decorum at Burlington Arcade prohibiting boisterous behaviour, including riding bicycles, hurrying, humming and whistling. Sir Paul McCartney is famously one of the only people who is exempt from this ban. Another person who is allowed to whistle in Burlington Arcade is a young boy from the East End who was going through some tough times. The Beadles took a shine to him and said that if he got a good school report, they'd issue him a permit to whistle. The Beadles stuck by their promise and issued the permit.

Look out for… the minor details. Although from afar each shop front in Burlington Arcade looks identical, when you get up close you can notice the individually crafted features that make each shop front unique. Try and spot them all!

Want to know more about what to do in the area?
Visit stjameslondon.co.uk and follow @stjameslondon and @london.westend