The Afternoon Tea team took a trip to the newly opened Great Scotland Yard hotel to sample their Afternoon Tea.

Perfectly set just a short walk from Covent Garden, our journey to the 5-star luxury hotel comprised of a gentle stroll through one of Central London's most famous areas - taking in some of the iconic nearby landmarks, such as Trafalgar Square and Downing Street.

A turn down a side street leads us onto Great Scotland Yard where the charming Edwardian building stands in between Whitehall and Northumberland Avenue. 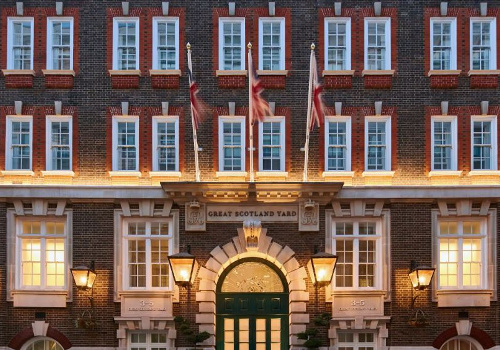 Although it's located in the heart of such a vibrant area, the hotel is nestled away enough to retain that satisfying feeling of a relaxing retreat from London's hustle and bustle - perfect to unwind after a busy day sightseeing.

Most famously recognised as the Metropolitan Police headquarters in the Victorian era, Great Scotland Yard's name initially seems geographically confusing - but its origins derive from how it was the site where Scottish Royalty resided during visits to England in the medieval period.

Fewer buildings in London have played such an integral part in shaping the character of London and the hotel embraces its heritage with stylish design features including sniffer dog handles and a cocktail bar themed after an infamous 19th century gang of female shoplifters! Each detail is thoughtfully crafted to create a unique treasure trove that acts as both 5-star hotel and fascinating museum of London history. 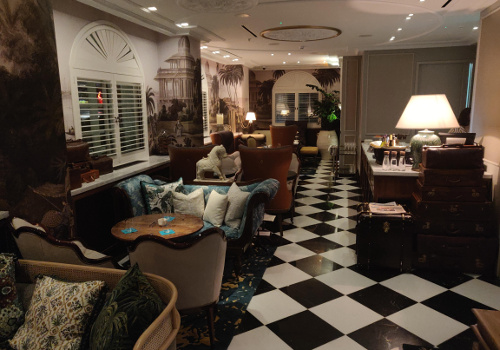 Afternoon Tea is, of course, a huge part of the Capital's identity so it's very fitting that the Great British tradition can now be added to Great Scotland Yard's legend.

Afternoon Tea is served in The Parlour, a dazzling lounge designed in the style of the Imperial Palace of New Delhi, drawing on the adventures of Britain's Victorian explorers. 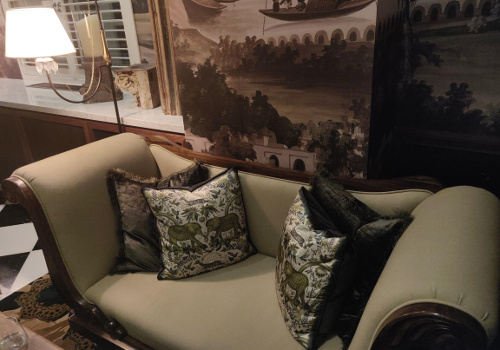 Our friendly servers, Melanie and Ana, welcomed us into the room before seating us in a cosy area next to a fireplace in the far corner of the room.

They assured us it was their favourite spot in the parlour - and as we settled into the plush cushioned chairs, it's not hard to see why! 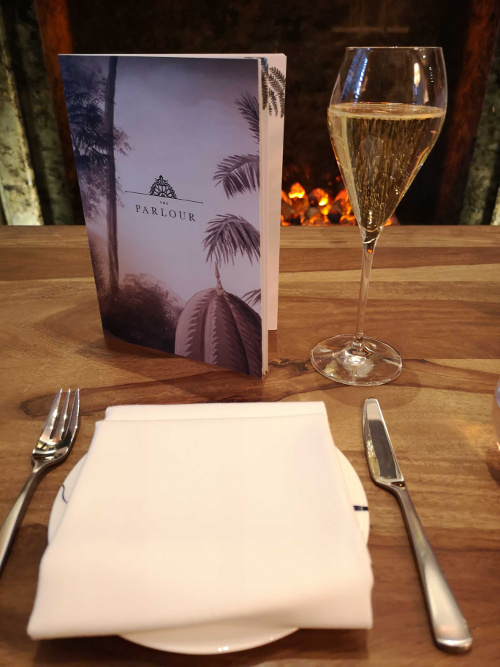 The Afternoon Tea experience began in style - with a glass of Gusbourne, Brut Reserve. The fine English sparkling wine has a wonderfully dry bite and whet our appetite for the upcoming savoury plate.

The savouries come served on their own classic three-tiered stand, but the presentation is where the tradition ends. Continuing the theme of the room, the savoury plate is inspired by the spices of the sub-continent, eschewing traditional finger sandwiches for delicious bites of exciting flavour combinations such as Bombay crab tart with pickle and 'Coronation' Pate en croute. 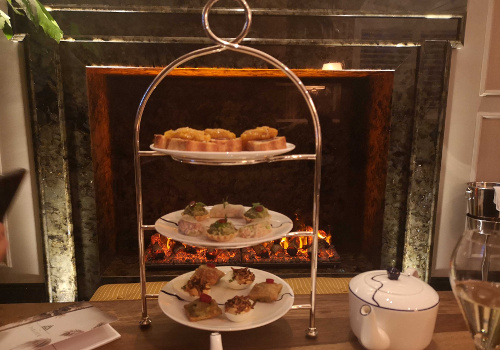 Each savoury bite was its own taste sensation that transported you to India by way of the palate.  Our personal favourite had to be the bedmi puri with chilli, cheese and coriander, a sumptuous parcel that exploded in the mouth to release the most incredible flavour. It was so good we just had to order another plate! 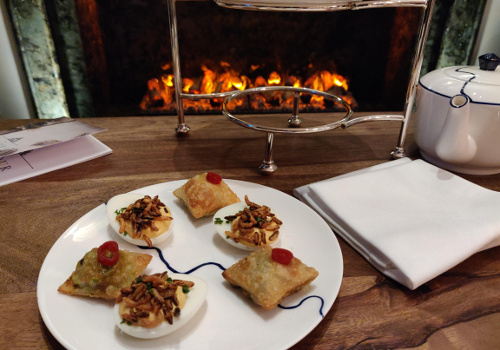 Every aspect of the Afternoon Tea is thought out and well considered, summed up by the personalised nature of the tea service. The selection is made up of 10 single estate teas, which Melanie and Ana confidently walked us through and allowed us to come to a considered decision. A stickler for old habits, we went with the Earl Grey, which was clean and bright, featuring a nice citrus bite.

The Parlour have taken Tea service into the new age with technology to ensure we had the perfect cup of tea. In what originally looked like an alchemist's kit, the tea is brewed in a glass bowl at the right temperature above the classic teapot. Our servers knew the perfect time it takes to brew the tea and once it was ready, pressed a button to release the brewed tea into a teapot. Say goodbye to an over-steeped, bitter beverage! 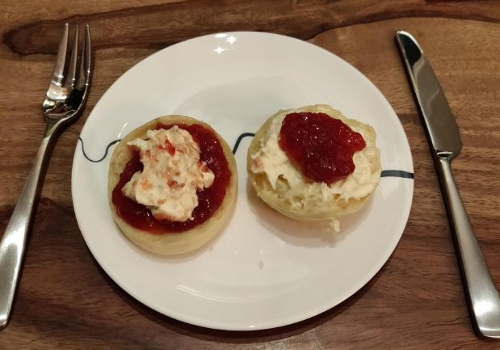 It was now time to revert to tradition and pair our tea with the staple of Afternoon Tea: scones. The scones arrived at the table in a cosy blanket that looked perfect in front of the fireplace with clotted cream and organic house made jam. After debating on whether to go Cornish or Devonshire, we eventually decided to do one of each before tucking in. The scones were wonderfully fluffy with a slight chewy underscore. In other words, just as they should be!

We had now reached the main event with the sweet plate, a combination of wonderful delights equally inspired by the tastes of New Delhi as it is by the history of Great Scotland Yard. The sweet plate takes your tastebuds on an amazing adventure of discovery including delicious treats such as yoghurt and rhubarb mousse, pistachio macaroon & chai tea and milk chocolate religieuse. 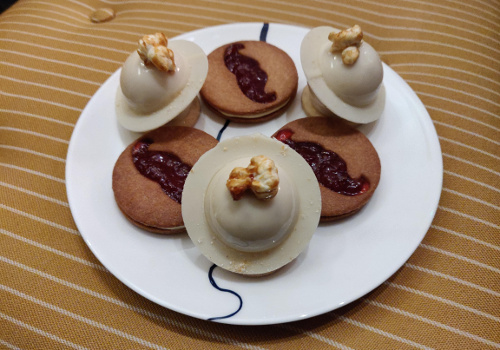 The sweet plate is immediately eye catching, particularly the Jammy Dodger in which the jam opening is quirkily designed in a moustache shape to honour typical policeman facial hair fashion of the late 19th century!

After polishing off the sweet plate, we received one final treat to top off the afternoon: warm madeleines that melted in the mouth to give us a few final moments to relax and take in what had been a wonderful Afternoon Tea experience that is a perfect new chapter in the history of this illustrious building! 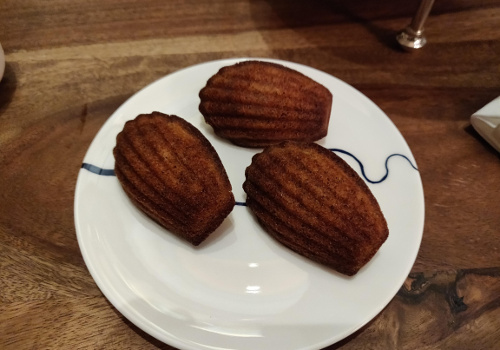 Afternoon Tea at Great Scotland Yard is priced from £55 per person and is served from 2.30pm to 6pm Monday - Friday and 12pm to 6.30pm Saturday - Sunday. Book your spot here